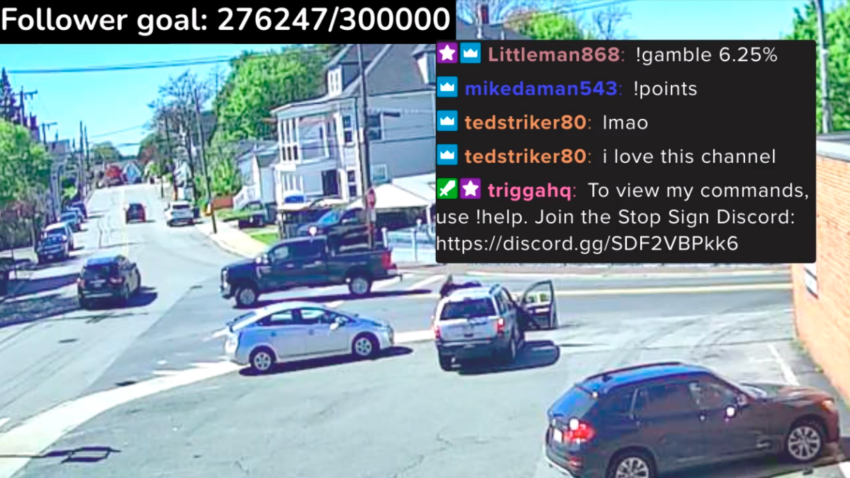 Massachusetts isn’t exactly known for having the best drivers. Over the years, Boston has consistently ranked at or near the bottom of studies examining poor driving and heavy traffic. Despite the ignominious distinction, some residents revel in the state’s reputation for housing motorists with a general aversion to obeying speed limits, using their blinkers, and coming to a full stop at stop signs.

The appeal of watching bad Massachusetts drivers has now gone global, as more than 275,000 people have subscribed to a live video feed of a Salem intersection, watching hours of cars to see whether they’ll actually come to a full stop at the intersection’s stop sign.

The “StopSignCam” channel began broadcasting on live-streaming platform Twitch in mid-February, with the eye-catching promise that “98.73% of vehicles don’t stop” at the unidentified intersection.

While that number proved to be somewhat of an exaggeration, viewers around the world have still tuned in daily to watch cars stop, slow, or speed through the intersection, building an online community in the process.

Viewers place bets (using virtual stop signs as currency) on what a particular car does at the intersection. There are nicknames for different types of drivers: “Rollers” slow down but don’t come to a complete stop, while “Zoomers” blow right through the intersection. “Stoppers” actually come to a complete stop, as do “Forced Stoppers,” but only because of turning traffic, not because of the stop sign itself.

Beyond the hundreds of thousands of Twitch subscribers, hardcore fans gather to celebrate all things StopSignCam on chat service Discord, where they can share stop sign memes, post clips they edited from hours of watching the camera, and chat with fellow enthusiasts.

One Discord user with the display name Lettuce aptly summed up StopSignCam’s appeal: “The channel is soo dumb, but it’s fun to watch.”

As the community grew, some enterprising viewers figured out where the intersection was, leading to funny clips where people staged lightsaber battles, pantomimed walking against a stiff wind, or performed physical feats like jumping jacks and backflips. One time the camera caught a police officer flipping its lights on and peeling out after a van ran through the intersection, sending viewers into hysterics.

Viewers and subscribers to StopSignCam surged in late March after TikTok user JhbTeam posted a video about it, garnering more than 2.8 million views in the process.

“If you’re ever bored and want to do something fun with your life, there’s this Twitch account I found where it’s just a stop sign in a neighborhood,” JhbTeam wrote. “A lot of the cars do not stop at it.”

For a brief moment, it appeared that the stream’s popularity would be its downfall. Shortly after the TikTok was published, the owner of the camera took the channel offline.

What began as a lighthearted effort to “shed some light” on the traffic infractions, according to the owner of StopSignCam, soon turned into a nuisance for neighbors.

“I had a neighbor get a couple pizza deliveries in a row, and she called about it,” the channel owner, who wished to remain anonymous, told gaming website Kotaku. “She said that she loved the chat and found it funny, but was worried she would get more. I told her that neighbors are more important than a stream and stopped streaming.”

Salem police Captain Fred Ryan confirmed to the Boston Globe that he had heard complaints about the livestream from people who “didn’t like all the attention the neighborhood was getting outside of the traffic issue.”

StopSignCam did manage to accomplish its original goal of attracting attention to the traffic issue at the intersection. Salem’s director of traffic and parking, David Kucharsky, told the Globe that the town would be looking at the non-compliance captured by the camera at various intersections, though he would have preferred a phone call or email.

“We aren’t aware of everything going on all of the time in the city, and we look to the public to bring things to our attention,” he said. “I’m glad it came to our attention.”

Nowadays, the channel prioritizes the privacy of nearby houses. The no. 1 rule of the Twitch channel’s chat is to not post the address of the intersection, and moderators warn or ban viewers who ask about the location or post identifying information. The channel’s owner has also configured the camera so that it’s extra-blurry, and the viewer chat obscures the nearest house completely. Many of the funny clips of the old intersection shot with a crystal-clear camera and an unobstructed view of a nearby home have been removed from Twitch.

As the initial impact of JhbTeam’s viral TikTok faded, the daily viewers of StopSignCam have dipped slightly, from thousands of concurrent viewers at its peak to 200-300 at any given time.

Viewers don’t seem to mind the change. While the on-camera stunts are few and far in between and the Twitch chat is less frantic, the meditative quality of watching the cars roll by hasn’t been diminished.

“This is the best stream ever,” wrote one Discord user on May 1. “It has ascended to a higher level.”