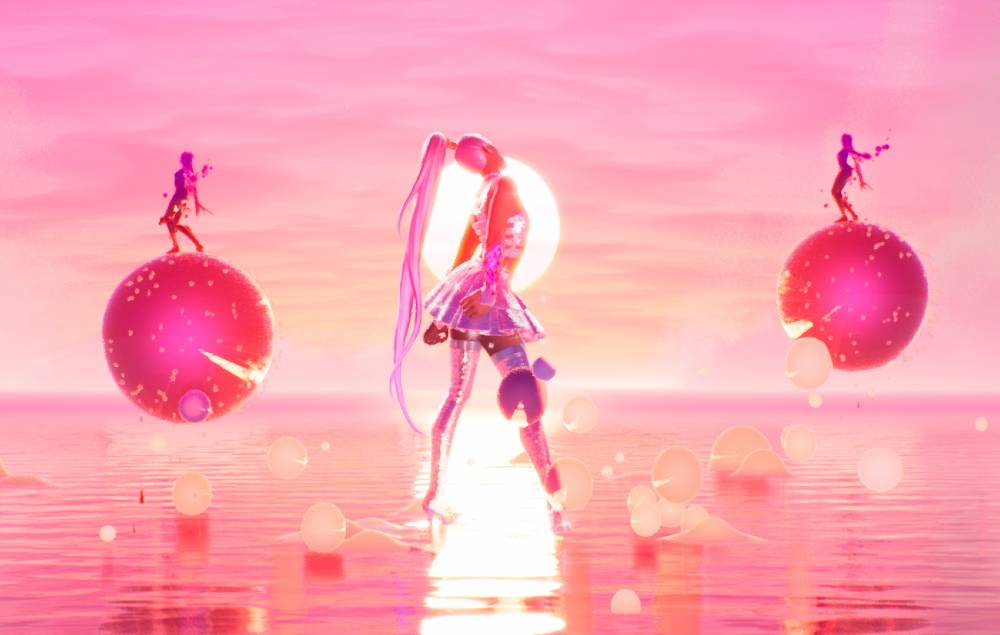 Since it debuted in 2017, Fortnite — part multiplayer battle royale game, part pop-culture ouroboros — has continued to be at the helm of innovation. From fashion shows and film screenings to collaborations with musicians, Fortnite has continued to cultivate authentic and collaborative social interactions beyond gameplay.

With Ariana Grande‘s Rift Tour — the latest in-game musical event for Fortnite players — Epic has simulated an interactive, world-building experience that lets fans step into the surreal setting of Grande’s psyche. “What we were trying to do was put a lot more control and interaction into the players’ hands and bring to life worlds, moments of Fortnite and also moments of Ari’s music that are completely reimagined and unexpected, so there’s a huge dynamic range, that you’ll see,” Phil Rampulla, head of brand at Epic Games, tells NME.

Still, you could say that in-game gigs are still just beginning for Fortnite. It wasn’t until 2019 that Fortnite began its foray into the in-game concert experience with Marshmello, featuring strobe lights, hologram-like clones of the artist and all the trappings of an in-person EDM show. But what began as more “traditional” concert simulations have evolved into an interactive setting for users to enjoy specially-created realities to explore while listening to their favorite artists.

With Travis Scott’s record-breaking Astronomical show, users got to float through space, experience a handful of galaxies and hear a brand new song during the 9-minute gig. This June, Fortnite hosted an Easy Life concert where the English R&B group was featured on screens as the user both swayed to the music in various locations like one would at a concert, but also skateboarded to the band’s songs in alternate worlds.

Thanks to Fortnite’s robust engine, built using Epic’s own Unreal Engine but with so many moving parts it’s equally happy letting users build a castle as it is to let them fish, the company has been able to develop new and fantastical realities for users. That platform was the foundation of The Rift Tour, making it a deeply personal experience for fans, so everything from the outfit you choose to the path you take along the way will impact your journey. Furthermore the ability to interact with the artist and themes associated with Grande brings the community together in a virtual setting that feels intimate.

With Ariana Grande’s Rift Tour, Fortnite combines a five-show concert experience with a world-building experience that features creative decisions that pay homage to the singer and her tastes. From flying down a rainbow raceway and riding llama unicorns to cloud animals and her signature ponytail, The Rift Tour’s 10-minute gig fuses Grande’s own cotton-candy-like imagination and tastes with Fortnite.

Experiences like jumping with no gravity while doing gymnastics or flying out the back of a biplane made The Rift Tour more exciting than previous Fortnite gigs and ultimately take Grande’s concert (and the game itself) to the next level. “We want to be different, and not for different sake, but because the collaborative nature of working with a different partner just enforces that we want to create something truly original to [them],” says Rampulla.

One particular draw for serious Grande fans is the “skins” available in the game. Beyond Grande fans and players jumping into the game, they’re able to interact with artists in a whole new way by purchasing the outfit she’s going to be sporting in his experience in-game, as well as all of her accessories. Users can rock Grande’s glittery costume — a belted skirt and matching halter top — with a backpack dedicated to her pet pig Piggy Smallz by spending a few V-bucks.

“There are two core outfit types, a set of cosmetics, the pickaxe, the glider and there’s the back bling of Piggy Smallz, which is one of the most adorable things we’ve created in our world,” explains Rampulla. Grande “had a lot of input” on these items and “really helped us get it,” he adds.

But of course, it’s the music in addition to the creative flourishes that are alluring to both Grande fans and gamers: The Rift Tour features a career-spanning list of tracks from the pop megastar’s albums Yours Truly (2013), Dangerous Woman (2016) Sweetener (2019) and 2020’s Positions. Featuring songs like the friendship-flexing “7 Rings” and cathartic house anthem “Be Alright,” the setlist touches on the singer’s hits and highlights. So, while you’re traveling on a rainbow road, jumping on pastel-pink tulips, or watching a giant Grande burst from the ground as an angel with crater wings, the drama of the music matches the game’s settings.

“We wanted to look at it holistically and make sure that there was a really interesting rhythm and flow to each experience where, as you’re coming off of really intense highs, there was a moment to relax, take in the world, and as any great show does, get that rhythm and that balance right,” Rampulla explains. There was “too much” music to choose from, he says, but ultimately Ari and Epic’s artists chose “a completely different range throughout where her music was definitely reflected in very wild and unexpected environments and moments.”

Following The Rift Tour, Fortnite plans to build on its in-game music experiences by continuing to think outside the box and push boundaries when it comes to modeling interactive entertainment — or even creating new forms of entertainment that don’t even exist yet. “The first question we always ask is, ‘What have you always wanted to do but can’t because of real-life limitations?’” says Rampulla. “Fortnite is a place for the impossible, so that’s always the starting point.”

Ariane Grande’s Rift tour performance will air several times over the next week.

The post How Ariana Grande’s ‘Fortnite’ Rift Tour took gamer gigs to the next level appeared first on NME.