Ahead of his debut North American War & Wonders Tour, which launches Jan. 11 in San Diego, Grammy-nominated rapper and Rhythm + Flow inaugural champion D Smoke is wrapping up an incredible year by giving back to younger people in need.

On Saturday (Dec. 18), the Inglewood, California, native and former high school teacher hosted a Reimagining CommUNITY During the Holidays event, in partnership with CASA of Los Angeles, Crete Academy and Cancel The Contract: Antelope Valley.

During the heartwarming festivities, D Smoke and his his wife, Grammy-nominated singer-songwriter and violinist Angelina Sherie, were joined by their parents and pet dog, along with local Crete Academy elementary school students, to sing Christmas carols for South Central Los Angeles foster children at transitional youth and foster homes Sanctuary of Hope and Project Destiny Group Home. D Smoke also provided gifts to the youth, presented by Adidas and Black Santa. D Smoke concluded his holiday give-back with an intimate gathering at Sip & Sonder in Inglewood.

“Cancel the Contract is doing great work that’s aligned with the work I’ve been doing since I was in college, whether it be providing access to higher education or serving communities where education needs love and attention,” the “Black Habits” hitmaker tells Billboard. “Their mission is to stand against over-policing in schools.” 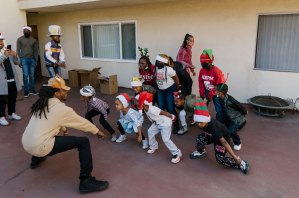 “The culture and love for elementary school students at Crete Academy is beautiful,” adds the education reform advocate. “Even the language [they use] and how the staff is trained to deal with kids is super aware, conscious and responsible of how it affects children. And CASA of Los Angeles, those were the perfect organizations [to collaborate with].”

D Smokes recalls a particularly memorable moment from Saturday’s benefit event. “I come from church so to see the young kids really minister and positively impact teenagers [was amazing]. The little kids are so free and innocent-thinking, so it was magical to see a teenager who may have been at her breaking point tearing up because the little girl who had a solo while singing ‘Jingle Bells’ decided to make up her own lyrics. It was a beautiful moment because you’re left to assume that if somebody is feeling sensitive, it’s probably because they’re having a hard time with something. So that moment may have been encouraging.”

Speaking further on the importance of giving back and remaining active in his local community amid his rapid rise to fame, D Smoke explains, “People need to see success in places where they don’t see it all the time. Visibility is extremely important because when people see you within arm’s reach, the things you’ve accomplished become possible to them.” 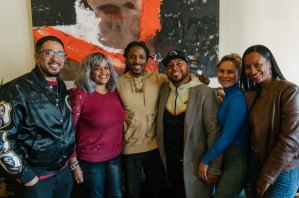 He adds that giving back to others also provides a personal sense of fulfillment and purpose. “The other side of it is that serving the community does something for a person. It puts things into perspective for the person doing the work,” he says.

Simply put, “giving back improves me. It makes me a better person and a better artist,” he says.

“It’s giving me all the energy and fuel to make better art,” says D Smoke, who released his sophomore studio album, War & Wonders, in September. His debut studio album, Black Habits, debuted at No. 25 on Billboard’s Independent Albums chart in February and was Grammy nominated for best rap album last year.

With all of his success in music, D Smoke still prioritizes the youth. “Kids need exposure and that’s given from professionals from diverse careers,” he explains. “They have to see their dreams in someone else and they need exposure to resources and the opportunity to explore their talents in different crafts so they can learn. They also need well-funded centers, from music and film recording studios to technology centers.” 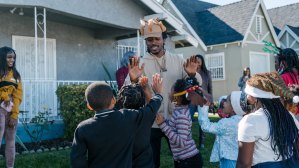 Smoke tied the knot with his wife Sherie on July 24. She appears in the album artwork for War & Wonders and will join Smoke on tour. Also exciting during D Smoke’s North American War & Wonders tour, fans can expect to see special appearances from his cousin Tiffany Gouché and Domani Harris (rapper T.I.’s son). “These are people who are true artists and with this being my first outing, people are going to see an authentic view of the art in person,” he says.

Pianist Smoke teases, “There will be some piano moments where I’m playing and rapping scaled down things and there will be full show moments. We’re excited and I trust that everything is going to work together as it should.”

The tour will run from the U.S. and Canada from Jan. 11 to Feb. 9, with stops in California, Texas, Maryland, Philadelphia and more. Tickets are available for purchase at D Smoke’s official website. 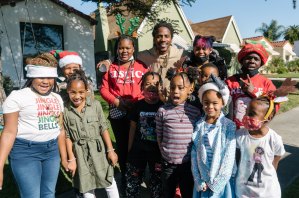 Previous:90 Day Fiancé: Debbie Gets GHOSTED By Her Date (Exclusive)
Next: Jury finds Kim Potter guilty of manslaughter in the fatal shooting of Daunte Wright