It’s not the first time we’ve covered the darker side of hip-hop lyricism, having highlighted many of the most disturbing songs the rap game has to offer. Unsurprisingly, it’s a pretty extensive list, with many rappers unafraid to dive into violent and horror-adjacent territory. For those of us who enjoy visiting such places, the most effective mode of transportation can be the art of storytelling.

With Halloween upon us, it feels fitting to highlight a few hip-hop tales that will leave you shook — not necessarily scared, mind you. Should you indeed decide to take a plunge into any of the ten collected works below, expect to be thinking about them long after the fact. Give in to that lingering sense of morbid curiosity and familiarize yourself with ten shocking storytelling songs to sit with — preferably with the lights on low.

And in the spirit of the day, you can also read up on horror films with Redman here.

While Royce Da 5’9″ certainly shocked listeners with a Twilight Zone-esque tale of bodily mutilation by the name of “Part Of Me,” one of his more disturbing songs arrived when he stepped away from fiction. Though the autobiographical Book Of Ryan as a cohesive album was far from dark, at least compared to something like Death Is Certain, Royce delivered his most vivid storytelling since “Tabernacle” on the chilling “Power.”

Centered around a Thanksgiving at the Montgomery home, Royce conjures a tapestry of a domestic disturbance. The characters are all brought to life in full nuanced glory, with Royce unafraid to draw attention to the shadier parts of his family tree. Upon queuing it up, “Power” will immediately pull you into one of the most brutally honest stories in the past few years; undeniably haunting, it’s the stark realism that makes this Book Of Ryan standout resonate so deeply.

It’s a testament to how incredible Nas’ God’s Son album that one of the project’s most lyrically elite tracks is a mere bonus track. In fact, were Nas to have pushed the narrative-driven “Pussy Killz” as a single, it wouldn’t be surprising to see it held in the same esteem as “Rewind.” Nas’ storytelling prowess is no secret, though based on how slept-on this sordid tale of adultery remains, it’s clear that there’s still work to be done.

In any case, “Pussy Killz” is relatively straightforward as far as the narrative goes — or so you think. Over a cinematic and classical-inspired instrumental, Nas proceeds to pull listeners into a first-hand account of betrayal and infidelity. Like any good story, there’s a solid cast of characters — namely the tragic James, who quickly finds his life spiraling out of control. All the while, Nas is there to provide his detail-rich narration, allowing the twists and turns to unfold with the poise of a veteran film director. 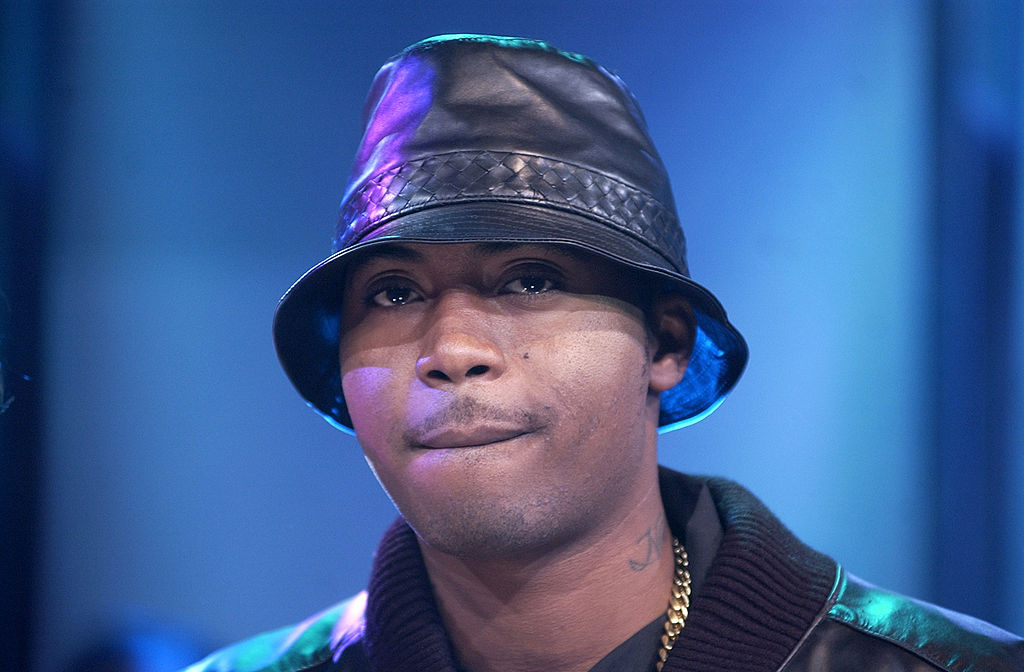 Those with knowledge of west-coast hip-hop history know all about WC, a storied member of the Westside Connection crew. And though he’s largely known for his work alongside Ice Cube and Mack 10, WC’s 2002 album Ghetto Heisman was a solid showcase of the dynamic MC. While there were plenty of bangers throughout, WC opted to close the project on a surprisingly haunting note.

On “Something 2 Live 4,” WC gets into storytelling mode, stepping behind the mic with cinematic flair as he paints a picture of a ransom gone awry. Rather than operating from a bird’s eye view, Dub inserts himself as a key player in the somber tale. What unfolds is a parent’s worst nightmare — upon finding his daughter kidnapped, Dub must scramble to put together the ransom money before the unthinkable happens. It’s a daring transition away from the established tone and one that brilliantly captures the danger inherent within the west coast rap blueprint.

Having written about the Damien trilogy at length already, there’s not much new ground for me to cover on DMX’s incredible supernatural saga. Still, it would be irresponsible to ignore the song that started it all, easily one of the most chilling hip-hop classics in the history of the culture. DMX’s “Damien” works on a variety of levels — be it a cautionary tale about the temptations of evil, or a devilish dose of horror fiction fueled by biblical imagery.

Over a sinister instrumental by Dame Grease, the gothic tone of “Damien” is set long before X begins rapping. As the story unfolds, X introduces our titular antagonist, bringing him to life with an unsettling and distinct cadence. What makes Damien so chilling is not only what’s presented, but what’s implied. The possibility that our complex protagonist may find himself ushered further down a dark road, one that will all but damn his soul. It’s truly compelling stuff on a thematic level, and it leaves you wanting more — luckily, both sequels do not disappoint. 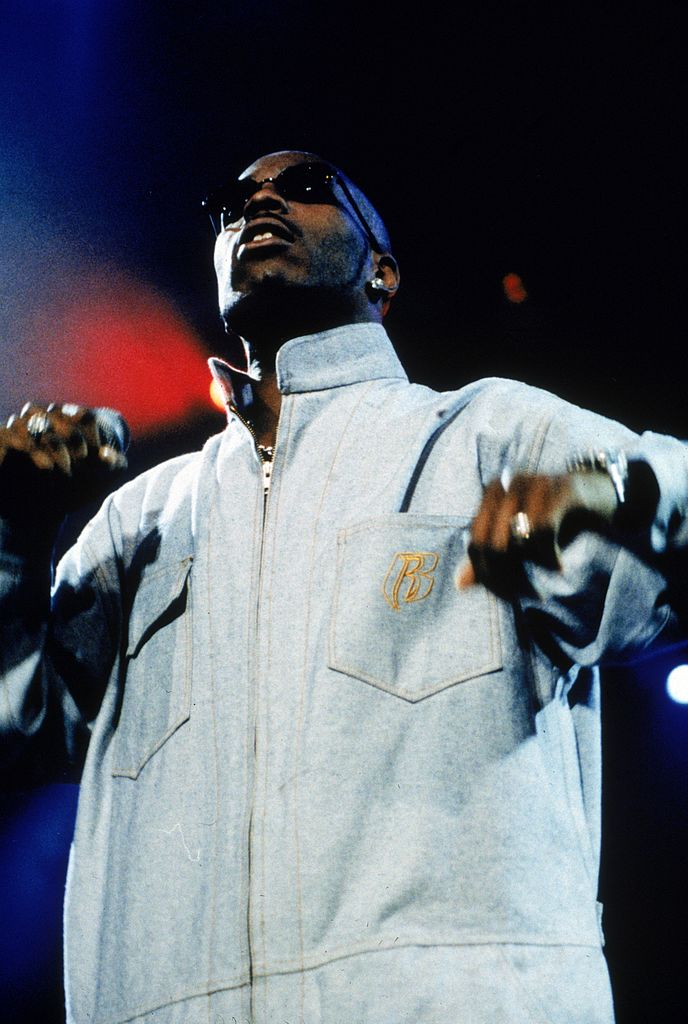 Every so often, JAY-Z takes the opportunity to flex his storytelling chops — and given that he’s easily one of the greatest rappers of all time, he’s as solid in that department as any emcee. Rare though his forays into fictitious narratives may be, Blueprint 2 highlight “Meet The Parents” immerses listeners into a vividly rendered world complete with a cast of complex characters.

Over a mournful backdrop by Just Blaze — who sets a cinematic tone with one of his most emotionally charged instrumentals ever — JAY-Z paints a picture of a family’s tragic decline. Though bleak, his omniscient narration and detached tone highlight the inevitability of fate; the conclusion is already cast in stone, we’re merely watching events hurl toward their logical end. At once a scathing social commentary and a nuanced character study, the track’s climactic reveal is sure to leave a lasting impression long after the album ends.

Eminem has no shortage of tracks that could earn a spot on this list; “97’ Bonnie & Clyde,” “My Darling,” “Stan,” and “Stay Wide Awake” come to mind. Yet none are as emotionally devastating — not to mention infamous — as “Kim,” a Marshall Mathers LP cut that is arguably one of the most difficult songs to sit through, period.

It’s not that the ultimate conclusion is all that surprising — in fact, one can predict the grim outcome long before it occurs. It’s the sheer painful passion in the delivery that makes “Kim” so uncomfortable, to the point where it’s hard to see the line where fiction ends and reality begins. Insofar as the writing itself, “Kim” plays out like a drunken stream-of-consciousness, the disturbingly brilliant sort of penmanship that feels at once sloppy and meticulous. The delivery enhances the immersive realism, and one can only imagine Dr. Dre’s face once Eminem played this one back on the studio monitors — let alone Kim’s. 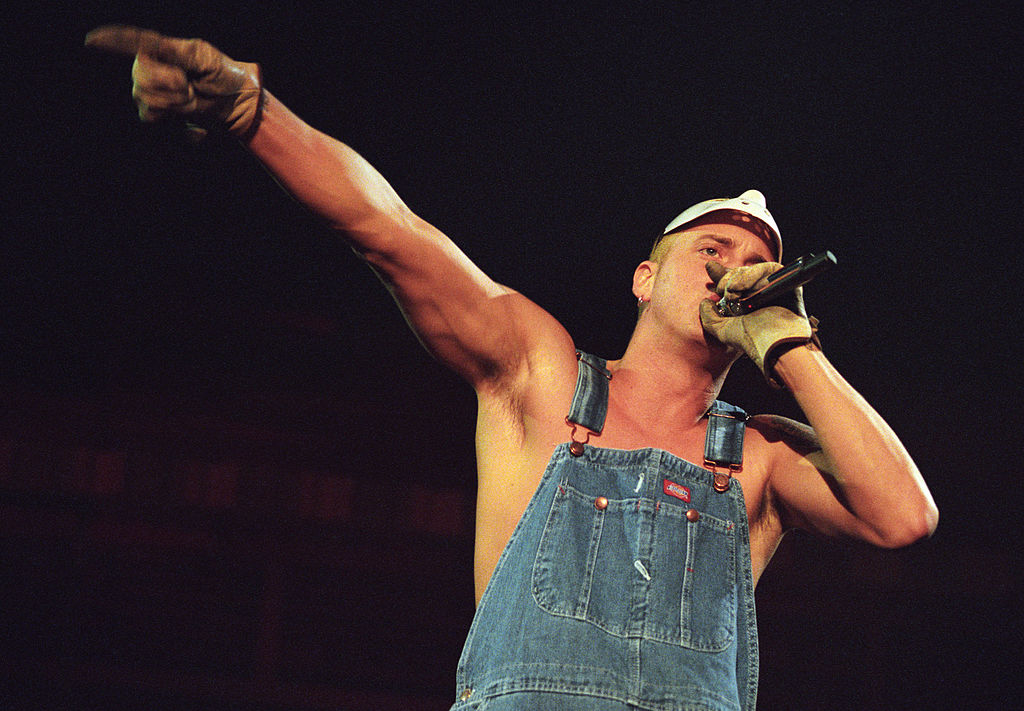 Scarface – I Seen A Man Die

There are many who would credit Scarface and The Geto Boys as some of the early innovators of the horrorcore subgenre, and understandably so. Yet while many of their earliest tracks are among the most violent and depraved selections in hip-hop history (think “Mind Of A Lunatic”, for example) one of Scarface’s most enduring songs has to be the profound and haunting “I Seen A Man Die.”

Originally released in 1993 as part of Scarface’s The Fix album, the track showcases an all-too-often underrated lyricist at the height of his craft. Penning a tale that spans across years, Face follows the life of a man trapped in a violent cycle, reflecting on universal themes of loss and regret. His baritone cadence imbues his words with gravitas, and it’s likely that Scarface’s heavy reflections will endure for decades to come. A song that will leave you shook, but not without spurring a moment of introspection first.

Immortal Technique – Dance With The Devil

You already knew this song was going to be included, as in many ways, it’s among the most shocking songs ever written in hip-hop history. That’s not to say that Immortal Technique’s notorious masterpiece should be written off as mere shock value, as the lyricist makes sure to dedicate a substantial amount of time to both worldbuilding and character development. The saga he depicts comes alive with such detail it’s almost as if Technique experienced it first-hand — in fact, he claims the events are actually based on a true story, though many have disputed that.

At this point, the song’s reputation precedes it, and detailing the plot would be a disservice to those who haven’t yet heard it. Fans of storytelling songs would be wise to check this one out as soon as possible — provided you have somewhat of a strong stomach. Yet those that take the plunge will quickly find themselves into Immortal Technique’s detailed examination of crime and consequence, with an ending that stands among the bleakest conclusions in media, period. 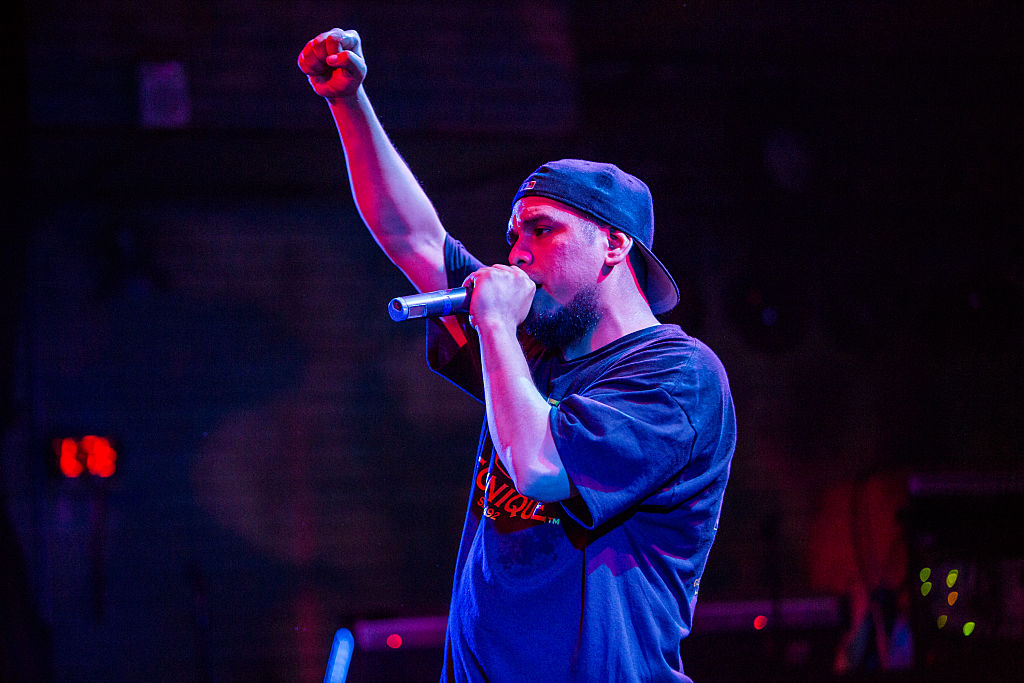 The combined storytelling talents of Raekwon and Ghostface easily stand at the top of the hip-hop pantheon. Tending to favor grimy crime sagas, Rae and Ghost once again worked their magic on the classic Only Built 4 Cuban Linx Pt. 2 cut “Gihad.” For his part, Rae weaves an intricate setting replete with detail, but it’s Ghost who makes this one really resonate long after the fact.

While Rae engages in his own criminal capers, Ghost lamps across town with a lady friend. Leaving absolutely nothing to the imagination, Tony shamelessly pulls listeners into his x-rated tryst. Unfortunately, the woman he’s engaged with happens to be the mother of his little homie’s child — his little homie who happens to be barging through the door with his gun drawn. What follows is a stand-off that truly leaps off the page — rest assured the Something About Mary reference will leave a mark. Throw in an instrumental from the king of horrorcore himself, Necro, and “Gihad” makes for a fitting addition to the list.

Tech N9ne – In The Trunk

Fans familiar with the extensive discography of Tech N9ne already know about his storytelling chops. And while many of his best writing centers around reflections on his own life experience, his beloved K.O.D album found him taking a spooky foray into horror fiction on several occasions. While the obvious choice for inclusion has to be the extremely chilling “Pinnochhio,” — if only due to the unsettling cadence Tech employs — the song was covered at length in our “Most Disturbing Songs” piece right here (and there is a Part 2, right here).

Instead, shift your attention to its companion piece, the delightfully devilish “In The Trunk.” A simple story at its core, the song centers around Tech N9ne’s impulsive decision to kidnap a woman, lock her in the trunk of his car, and drive around for what ultimately turns out to be weeks. The darkly comedic approach Tech takes in recounting the situation makes things even more disturbing; at one point, he drills holes in the trunk so he can feed his captive “hot dogs and ho-hos.” By the time the track wraps up and the fate of his victim is revealed, it’s hard not to imagine Tech as a worthy horror villain in his own right.

LISTEN: Tech N9ne – In The Trunk 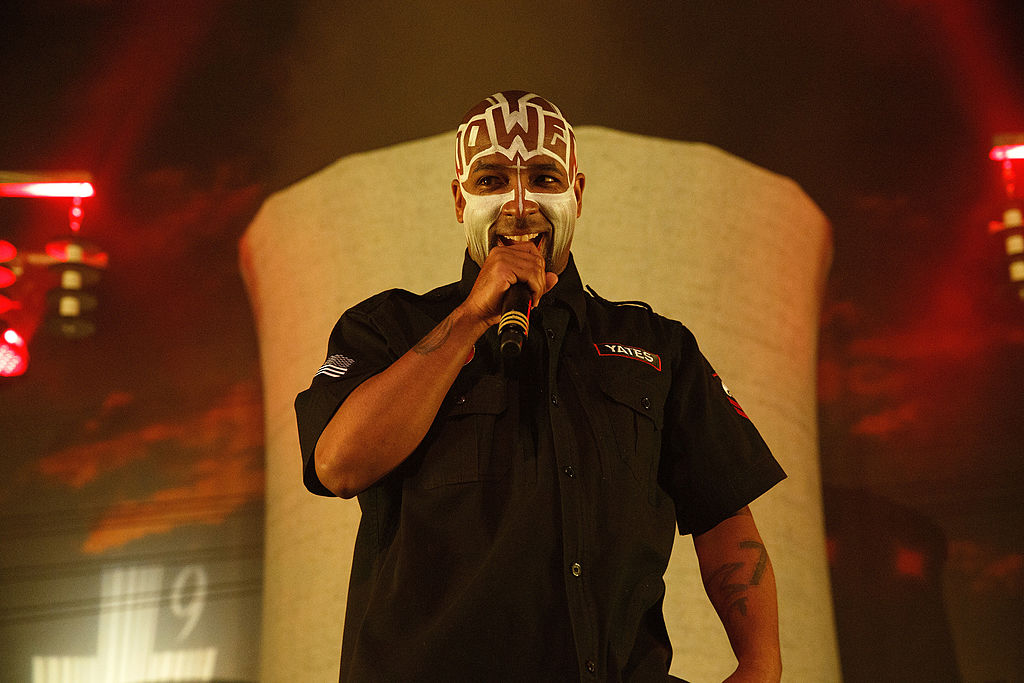