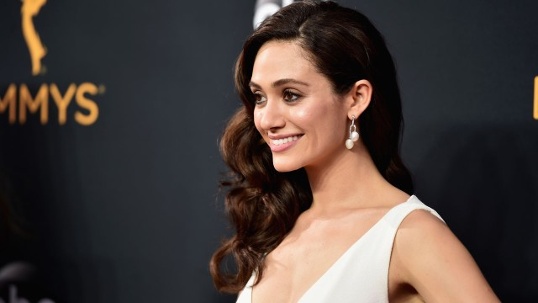 Television stars stepped onto the red carpet at the 68th annual Primetime Emmy Awards at Microsoft Theater on Sept. 18, 2016, in Los Angeles. Click to see the more.

“The People v. O.J. Simpson” ran away with the night at the 68th Emmy Awards Sunday even as “Game of Thrones” broke a record.

The FX mini-series scored wins for outstanding limited series and for some of its actors.

One of them, Sara Paulson, won for outstanding lead actress in a limited series. In her acceptance speech, Paulson talked about the challenge of playing O.J. Simpson murder trial prosecutor Marcia Clark.

Her words brought Clark to tears.

“The more I learned about the real Marcia Clark, not the two dimensional cardboard cut-out on the news, but the complicated, whip smart, giant hearted mother of two who woke up everyday, put both feet on the floor and dedicated herself to righting an unconscionable wrong, the more I had to recognize that I — along with the rest of the world — had been superficial and careless in my judgment and I am glad to be able to stand here today in front of everyone and tell you that I am sorry,” Paulson said.

Paulson was joined in the winners’ circle by her “People v. O.J. Simpson” co-star Courtney B. Vance who won outstanding lead actor in a limited series.

Sterling K. Brown also won for outstanding supporting actor in a limited series for his role as Christopher Darden in the “People v. O.J.”

For the second year “Game of Thrones” took home the Emmy for outstanding drama series. With its 38 wins the highly successful HBO series broke a 12 year record for most Emmy wins by a series which had been held by “Frasier” with 37 Emmys.

“I feel so lucky to be on a show that puts women at the center,” Maslany said.

It was an emotional night for many winners.

Julia Louis-Dreyfus was tearful and shaking when she accepted her fifth Emmy in a row, this time for outstanding lead actress in a comedy series for “Veep.”

She apologized for “the current political climate.”

“I think that ‘Veep’ has torn down the wall between comedy and politics,” she said. “Our show started out as political satire, but it now feels more like sobering documentary.”

She had a personal moment at the end of her acceptance speech when she dedicated her win to her father, William Louis Dreyfus, who she said died on Friday.

“I’m so glad that he liked ‘Veep’ because his opinion was the one that really mattered,” she said.

Henry Winkler offered a loving tribute to director/producer Garry Marshall who died in July. Winkler said his former boss “had a generosity of spirit and knowledge.”

“I should know, he gave me my career,” Winkler said. “And I will tell you that anybody who was lucky enough to meet him he changed their life.”

The remembrance of Marshall kicked off the “In Memoriam” portion of the Emmys, which featured Tori Kelly singing “Hallelujah.”

Jeffrey Tambor won his second Emmy in a row for best comedy actor for his role in “Transparent.” He plays a transgender woman on the Amazon series.

Tambor encouraged the industry to offer more opportunities to the trans community.

“I would not be unhappy were I the last cisgender male to play a female transgender on television,” Tambor said during his acceptance speech. “We have work to do.”

The Emmys began on a lighter moment with a funny nod to some of TV’s biggest pop culture moments of the past year.

What followed was Kimmel catching rides with everyone from late night host James Corden to politician Jeb Bush and even a dragon from “Game of Thrones.”

There were plenty of O.J. jokes in Kimmel’s monologue. He teased “People v. O.J.” actress Sarah Paulson who brought Simpson prosecutor Marcia Clark as her date.

“Because everyone in L.A. knows if you want to win, sit next to Marcia Clark,” Kimmel said. Then, turning to Clark, he said, “This must be very strange for you… are you rooting for O.J. to win?”

Early on in the show Kimmel announced the Maggie Smith rule that any winner not in attendance would not be receiving their Emmy statue.

Smith has been nominated multiple times for her role as Violet Crawley in “Downton Abbey” but has not attended the ceremony. Kimmel rushed out after Smith won for outstanding actress in a drama series.

“We’re not mailing this to her,” Kimmel joked. “Maggie, if you want this it will be in the lost and found.”

Kimmel was also the butt of a bit.

After he lost in the variety series category to “Last Week Tonight with John Oliver,” the Emmy audience was treated to an exchange between Kimmel and his long standing “rival,” Matt Damon.

Damon showed up to taunt him over his loss.

“Can we all cheer Jimmy,” Damon urged the audience. “He’s a big loser.”

Leslie Jones also provided some comic relief during the usually staid portion of the show when viewers meet the accountants responsible for keeping the results a secret.

The “Ghostbusters” star, who has been dealing with trolls on Twitter, joined the reps from Ernst and Young on stage and joked that she needed their protection for her social media account.

“Put [her Twitter account] in your vault please,”Jones said. “Y’all over here using your skills to protect best voice over in a French sitcom meanwhile I’m over here butt naked on CNN.”

Streaming services did well right out of the gate.

Jill Soloway won for directing a comedy for Amazon’s “Transparent.” Aziz Ansari and Alan Yang won for writing on a comedy series for the Netflix series “Master of None.”

“We need to stop violence against trans women and topple the patriarchy,” said Soloway, whose show is about a trans woman.

TV is being hailed for improved inclusivity — compared to the film industry — in both its recognition and hiring of minorities.

About 25% of this year’s Emmy nominations in the acting categories went to people of color.

“Hollywood is doing good, but I’ll tell you women of color are doing even better,” nominee Viola Davis said on the red carpet. “We’ve gotten to the point where women are saying ‘You know what, I’m going to ask for what I want’ and I love it. A closed mouth don’t get fed.”

Kimmel acknowledged the diversity in his monologue.

“Here in Hollywood the only thing we value more than diversity is congratulating ourselves on how much we value diversity,” Kimmel joked during his opening. “The Emmys are so diverse this year the Oscars are now telling people we’re one of their closest friends.”