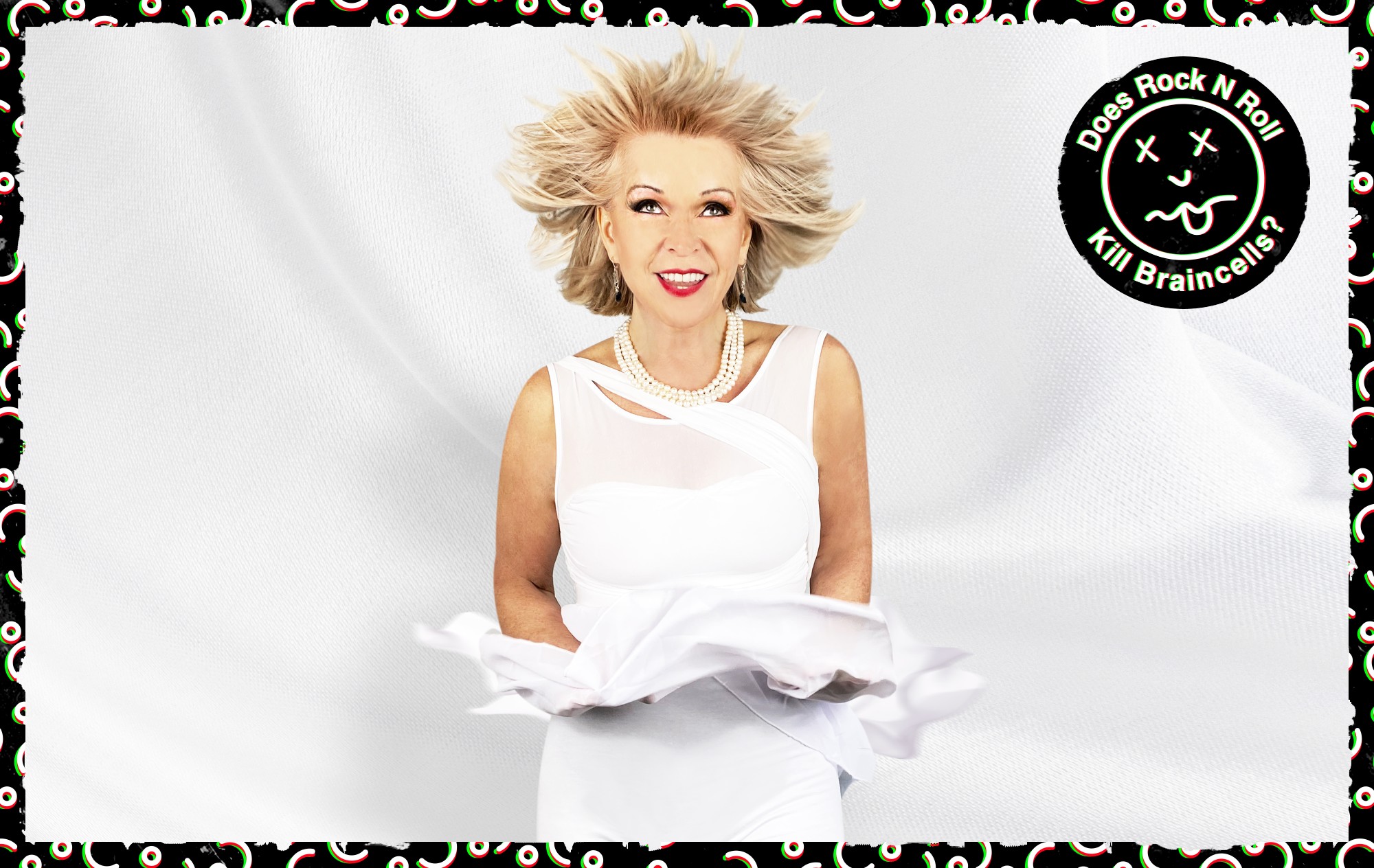 You starred in Derek Jarman’s 1978 punk film Jubilee. Upon its release, who created a protest T-shirt deeming it “the most boring and therefore disgusting film”?

“I got one right! I’m so happy! Derek Jarman, the director, was thrilled by that (Laughs). When we started pre-production, people were behind the film, but then the punk world felt it was going to be exploitative. Derek Jarman was special and had no compromise. He saw talent in everyone and everything. Working with him on Jubilee, I quickly became aware that I was being catapulted from nowhere into the glitterati of this new movement and I immediately knew it was special.”

Ever run into Vivienne Westwood?

“I actually did some modelling for Vivienne. She probably wouldn’t have known it was me, but I did some modelling for TV at her shop [Sex] which was great fun. I got John Lydon through the screen test for Quadrophenia. Franc Roddam, its director, asked me to go over to Johnny Rotten’s apartment, learn two scenes with him, and accompany him to the studio to do the screen test for the role of Jimmy. He was an absolute gentleman and a brilliant actor, but nobody would touch Johnny because they felt he was unpredictable.”

“Laurence Olivier was quite old when I worked with him [on the 1984 TV movie The Ebony Tower] and not terribly well so we could only shoot with him three hours a day, but he burnt brighter than anyone I’d ever met. He was a rebel and wonderfully naughty. I used to have supper with him in the evenings and was told not to let him drink – and we’d get through six bottles of champagne and he could still keep going! My first professional job was at the National Theatre so to be acting with him in a movie was thrilling.”

In a bizarre moment of TV, when you hosted the BBC2 chat show Friday Night, Saturday Morning in 1980, what video game did you introduce Steve Strange, Derek Jarman, Christopher Biggins and Bonzo Dog Doo-Dah Band’s Vivian Stanshall to?

“Well, I can only imagine it was Space Invaders – the only video game I’ve ever played!”

“I was promoting my [second] album ‘The Blue Meaning’ at the time and I was invited along to host. We rehearsed from 10am and the show didn’t go out until 10pm. By that time, everyone was either exhausted or stoned. Viv Stanshall and Steve Strange definitely weren’t on the planet!”

Steve Strange used to hire the arts commune warehouse, called ‘Mayhem’, you used to live in – where you slept in a coffin – for his parties. What was the most outlandish thing you witnessed there?

“Steve Strange would hire it for the weekends and I’d come back knowing he’d not been to bed for 4 days with a bin liner picking up all the booze cans after 400 people had been there for 76 hours. He was great at tidying! Iggy Pop rehearsed ‘Lust for Life’ there [at Mayhem] with John Cale on production, and John Cale was always coming in saying ‘Don’t tell Iggy I’m here!’ and hiding in my bedroom from him because he secretly wanted to see what he was up to. That building was great.”

Which of your album covers ended up with you being arrested?

“‘Cause we broke into the early warning system [RAF Fylingdales near Whitby]. We drove up from London to North Yorkshire, got through the fence, my face was painted blue and as we were taking the pictures, Land Rovers were appearing in the distance coming to get us. We got the film out because I stuffed it in my pants, as you wouldn’t be strip-searched back then.”

Any other memorable brushes with the law?

“All the time! We built the whole of Mayhem out of stolen wood from the morgue opposite us. Every night, we’d scale the wall into the morgue and funeral parlour to take the wood they’d use to build the coffins. Once, I was leaving Mayhem to go to a film set and a policeman said I couldn’t leave as the building was surrounded. They arrested a mercenary from Africa below us who was hiding nuclear warheads. Now we knew this guy – and we really liked him. We didn’t know what he did, but were down the pub with him every other day. He was an arms dealer!”

Which two TV shows did you perform a cover of Patti Smith’s ‘Because the Night’ on?

“Through the Keyhole? No, sorry! Stars in Their Eyes and… you’ve got me on the other one! Wait, French and Saunders?”

“I’d forgotten about that. That was huge fun. I spent most of the time sitting on set gossiping with Dawn French and Jennifer Saunders.”

You made your debut Top of the Pops appearance in 1981 singing ‘It’s A Mystery’. Name any other two acts who were on your episode.

“Adam Ant and… Joe Dolce, who sang ‘Shaddap You Face’?”

CORRECT. You could also have had: The Teardrop Explodes, Headgirl (Motörhead and Girlschool) and Stray Cats.

“That was everything I needed in life because I was the girl that everybody thought would do nothing with her life and suddenly I’m on Top of the Pops – the one programme the whole of the country watched. It was such validation and verification I had a future and was capable of doing something. Even though I knew Adam Ant and had done Jubilee with him, I was still star-struck by the whole event.”

Didn’t you once try to beat Adam Ant up?

“Yes! He formed a band for Jubilee that was needed in a scene called the Maneaters – I was the singer for it, and Adam’s wife, Eve, was the bassist. The problem was, I was too individualistic and I already had the Toyah Band. They said they needed to get a singer who was more feminine and melded in. And there was an altercation but Derek Jarman stood between us holding me at arm’s length laughing his head off! (Laughs) I was a terrible scrapper, but I had to be a scrapper in Birmingham. I had a reputation for sticking up for myself so there weren’t too many fights!”

You helped Prince Edward organise 1987’s ill-fated It’s a Royal Knockout. Can you name any three members of your team?

CORRECT. Among many others, you could have also had actor Christopher Reeve, Nicholas Lyndhurst – aka Rodney from Only Fools and Horses – and swimmer Duncan Goodhew. (Pop stars Sheena Easton and Cliff Richard were on Anne, The Princess Royal’s Team).

“Six months earlier, my friend Prince Edward asked me to be involved in it and I said yes. Jane Seymour, John Travolta and Tom Jones were all there, and the egos were bouncing off the wall. It was great fun but doomed not to work because people want their Princes to be Princes. Princess Diana wasn’t allowed to be on it – she wanted to do it, but Prince Charles said no.”

Which musical icon did you play when you toured prisons with a one-woman show in the 1990s?

“That was eye-opening and emotional. The whole reason I was asked to do it was to discourage heroin addiction. There was a sequence where I take a heroin overdose as Janis Joplin and I remember being in HM Prison Lewes and someone stood up and screamed: ‘Don’t do it! Just stop!’. We halted the show and I said ‘Are you OK?’, and he replied: ‘Please don’t do it. I’ve seen too many people do it’.”

You narrated the children’s TV series Teletubbies. But which pop megastar – and also fellow lockdown slayer – once dressed up as Laa-Laa for Halloween?

“Sophie Ellis-Bextor? I haven’t got a clue!”

“I would never have guessed that! Anne Wood, its creator, showed me the Teletubbies pilot – which she’d mortgaged her house for £60,000 to make because it had been dropped by the BBC. She didn’t know how she was going to survive and asked me to do the opening and ending narration – which I did as a favour. A month later, the BBC lost a children’s show and needed to fill that space within 24 hours. She ended up having to make 366 programmes within three months which shows how life can turn on a pin-head. The only time I’ve ever needed security when filming in public was at the height of Teletubbies because parents would tell their children who I was and we’d get mobbed!”

Any chance of you and husband Robert Fripp covering Taylor Swift on your beloved Sunday Lunch YouTube series?

“That would be good! Only if we get Robert in a Teletubbies suit!”

In the 1986 Smash Hits Annual, which musician did you describe as “Not my type at all. A great songwriter but too thin for me. I like big muscley hunks” – and he said of you: “Stick to acting”?

“Oh my God! (Laughs) I can’t think of anyone I would have thought that of! Was it Julian Cope?”

WRONG. It was Paul Weller. For a feature called ‘Excuse Me, My Mate Fancies You!’ where pop stars assessed whether they’d go out with each other, including Weller, and ABC’s Martin Fry (who said of you: ‘Looks like she has a heart of gold but she’s no Aretha Franklin.’)

“(Laughs) That’s funny! The press at that time used to try and make enemies of artists and whenever you’d run into each other, there would be huge apologies.”

Who said of your Toyah and Robert’s Sunday Lunch YouTube series: “I think the lockdown has drove them mental”?

CORRECT. In response to your typically bonkers and surreal cover of his band Black Sabbath’s ‘Paranoid’

“(Laughs) He’s our neighbour! We’ve got quite a lot of people around here – like Robert Plant – so we get to talk to them about it.”

Any chance of an album of your lockdown covers?

“I’m very impressed with myself! I was slightly terrified of doing this and I’m absolutely amazed at that score.”

Toyah releases her new album ‘Posh Pop’ on August 27. Get the lowdown on the Sunday Lunch session-inspired record here.

Previous:Simone Biles thanks Japanese gym where she trained to regain Olympic form
Next: Cuban Doll Says She Split From JayDaYoungan After Seeing ‘Gay Stuff’ On His Phone