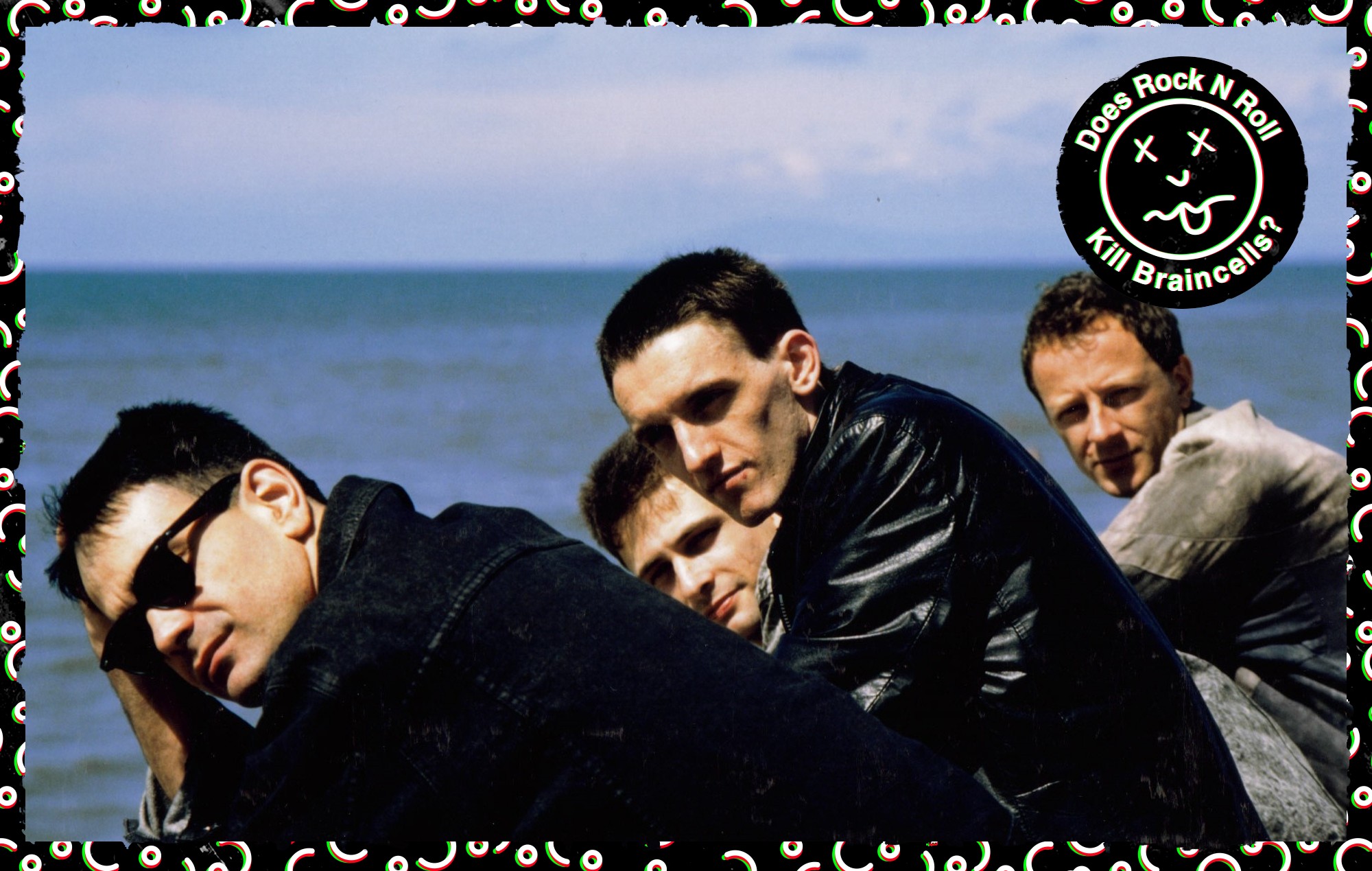 Who did your bassist Keith Gregory wear a mask of during your Top of the Pops performance of ‘Flying Saucer’ in 1992?

“I don’t know why Keith wore that. I had a love-hate relationship with Top of the Pops. Growing up, I never missed it but when The Wedding Present started, it had all these terrible ‘80s manufactured groups on, so we always thought: should we be doing this? The first five times we did it, we didn’t take it seriously and messed about, and I look back now and cringe. Whenever I see those clips repeated, I think: ‘Oh God, I wish I’d put more effort into my singing!’ But for ‘Flying Saucer’, we took it seriously, wore the Hazmat suits from the video and tried to make an artistic statement.

“When we played our cover of Steve Harley & Cockney Rebel‘s ‘Make Me Smile (Come Up and See Me’ on Top of the Pops, our guitarist asked for a double-necked guitar [a bass on one side and guitar on the other] so it would be obvious he was miming when the camera zoomed in. We thought we were being rebellious. And then, bizarrely, Status Quo came to our dressing room after and went: ‘God, you bands don’t give a fuck do you?’” (Laughs)

Who once slapped you across the face at the 1994 Reading Festival?

“That’s an easy one because it’s quite memorable! I was a massive Hole fan and sidled up to talk to her but she took exception to the fact we’d been working with [producer] Steve Albini. I’ve no idea why and she was a bit off her head – she might have had a few shandies (Laughs). So she slurred ‘You were working with Steve Albini weren’t you? Oh naughty boy!’ then slapped me! It was a playful slap. Our paths never crossed again.”

The Wedding Present’s seminal debut, ‘George Best’, reached Number 14 in NME‘s Best Albums of 1987 list. But which indie frontman (and fan of yours) once dressed up as the Manchester United footballer for the magazine?

WRONG. It was Tim Burgess.

“We’ve done two Tim’s Twitter Listening Parties – for our albums ‘Bizarro’ and ‘Seamonsters’ and they’ve been great, especially in lockdown. I called the album ‘George Best’ because I grew up in Manchester and United were my team. I had his photographs on my wall, and he was an icon to me: he was known as the Fifth Beatle and was always in trouble for not turning up to football practices because he’d been out dating Miss World the night before in a trendy nightclub. Our press officer arranged a photoshoot with him and I was nervous and hardly said a word.

“Our guitarist Peter [Solowka] chatted to him the most – about fishing weirdly! Our manager brought a 12-pack of lager to calm our nerves and I offered George a can, forgetting he was a reformed addict and on the wagon. Which was embarrassing! I don’t know if he ever heard the album, but the weird thing was some people thought George Best had made a record – we possibly got a few sales out of that!”

You’re releasing a 30th anniversary edition of The Wedding Present’s classic 1991  album ‘Seamonsters’. The music magazine Melody Maker once likened listening the album to doing… what to your ears?

“No idea! Scraping or sandpapering your ears?”

CORRECT. It was sandpapering them. Ouch!

“’Seamonsters’ now is seen as one of our iconic albums, but at the time it wasn’t particularly well-received across the board. It was seen as a diversion from what we’d done before – we did ‘George Best’ and ‘Bizarro’ and they were more jangly indie rock and then ‘Seamonsters’ was darker and more intense, and obviously we had Steve Albini as the engineer before he was even known. It was a different kind of group and that put a lot of people off.”

Name the two songs The Wedding Present have released that share their names with James Bond films.

“’Octopussy’ was presumably one of them ‘cause that was a track on ‘Seamonsters’. Then…we also covered the James Bond theme ‘You Only Live Twice’.”

CORRECT. You released a charity James Bond theme covers compilation, ‘Not From Where I’m Standing‘ last year. Did you ever toy with the idea of submitting a The Wedding Present James Bond theme?

“My other band Cinerama was partly inspired by the idea of taking John Barry soundtracks and making pop songs out of them, so the project was basically me messing around with James Bond themes. I’m a massive fan of the books and the films. Sometimes the themes really hit the mark – like Adele’s ‘Skyfall’  and the current Billie Eilish one [‘No Time To Die’] are classic Bond themes, but then you get terrible ones like A-ha and Sam Smith. Everybody we reached out to for our compilation said yes, and they did a great job – and those songs are really hard to cover well.”

The Wedding Present covered ‘Hand In Glove’ – and Cinerama tackled ‘London’ –  for Laundromat Records’ ‘Please Please Please: A Tribute to The Smiths’. Name any two other acts featured on the 2011 record.

WRONG. Among many others, you could have had: Kitten, Joy Zipper, Sixpence None The Richer, William Fitzsimmons, and Greg Laswell. What was your relationship with Morrissey like? The Wedding Present had been once branded “the next Smiths”…

“I’ve only crossed his path once. It was at the American Embassy where he queue-jumped then pretended not to recognise me in the corridor and turned his head away. (Laughs) I’ve never actually spoken to him. But I remember he slagged us off and then I received a postcard supposedly from him saying: ‘Sorry for slagging you off in the NME but that’s what us pop stars do!’. It matched his distinctive handwriting, and I mentioned it to a journalist, and the next thing Morrissey’s saying in the NME: ‘And now David Gedge is claiming to have received postcards from me!’ (Laughs) So who knows where the truth lies?”

What is the B-side to The Wedding Present’s 7” single version of ‘Montreal’?

“Was it ‘Where Everybody Knows Your Name (Theme from Cheers)’?”

CORRECT. There have been myriad of pop culture references in your songs over the years – from sitcoms like Seinfeld to comic book characters. Anyone ever mentioned in your songs got a kick out of it?

“Because the references tend to be from me growing up in the ‘60s and ‘70s, most were too old to have heard of The Wedding Present. There’s been quite a few comic book references over the years and [comic book legend] Alan Moore once sent me a note saying, ‘From one Bizarro to another’, which was nice.”

You have been associated with John Peel’s Festive Fifty, the long-running end-of-year ‘best songs’ list. Cinerama hit Number One in that chart in 2003 with ‘Don’t Touch That Dial’, but what was The Wedding Present’s highest entry and what number did it reach?

“We had Number Twos with ‘Kennedy’ and er…. ‘Nobody’s Twisting My Arm’?”

(Laughs) “That was a guess! I discovered John Peel’s programme around the same time as punk and listened to it religiously. People say, ‘You’re lucky that Peel was such a fan of the band’, but it was always obvious he would be because we regurgitated all the influences we’d heard on his show. I was freaked out by him because he was iconic and in many ways, I got on better with his wife Sheila because of that. I’m always excited to go onstage, and the only time I’d ever get nervous was when John Peel was there – The Wedding Present played live at his 50th birthday and Cinerama played his 60th.”

“I remember sitting with Mark E. Smith in a pub once and we had a really long chat and he was patting my hair down, smoothing his hand across my head saying: ‘Your hair’s sticking up a bit there!’ I’m a massive Fall fan and was firing all these questions at him and he got annoyed and said: ‘What is this? The fucking NME?’. At that point, I decided to act less like a fanboy! (Laughs)”

In 1994, you were enlisted for a unlikely appearance on Esther Rantzen’s cosy daytime TV show, arguing that ‘90s music was better than ‘60s music, against… who?

“Was it The Troggs”.

CORRECT. It was Reg Presley, the lead singer of  1960s band The Troggs, who were known for their 1966 take on ‘Wild Thing’.  The blue-rinsed audience didn’t agree with your arguments…

“It was odd. We weren’t the producer’s first choice by any stretch of the imagination! (Laughs) Jarvis Cocker told me Pulp had been asked to do it, but sniffed a set-up. But we had an album out, ‘Watusi‘, and it was a good chance to play one of our tracks on a television program you wouldn’t expect us to be on. So it worked in that respect, but we did feel like we’d been cast the fall guys in that particular studio debate!”

What is the bouncy castle called in The Wedding Present’s ‘Boing!’ video?

“I’ll take your word for that! (Laughs)”

What can you tell us about upcoming new Wedding Present music?

“It’s been difficult because of the lockdown; we’ve had to write a lot of the new album remotely, which is time-consuming. Now we’re seeing the results coming together and are deciding how to release it next year. We haven’t started recording yet, but we had a line-up change at the end of 2019 and our new guitarist is Jon Stewart, who’s also the guitarist in Sleeper, and he’s definitely shaped our sound. We’ve gone through so many line-up changes over the last 35-odd years that I feel like I’ve been in 10 different groups, and we never make the same album twice. I’m excited to see how this one unfolds. It feels like we’re at the beginning of another chapter.”

“Some of those are quite difficult – not even our most ardent fan is going to get the bouncy castle one, surely?!”

– The Wedding Present release their ‘Seamonsters’ 30th anniversary edition double-LP on 28 May. The band will be playing ‘Seamonsters’ live in full on 29 May on Dice TV