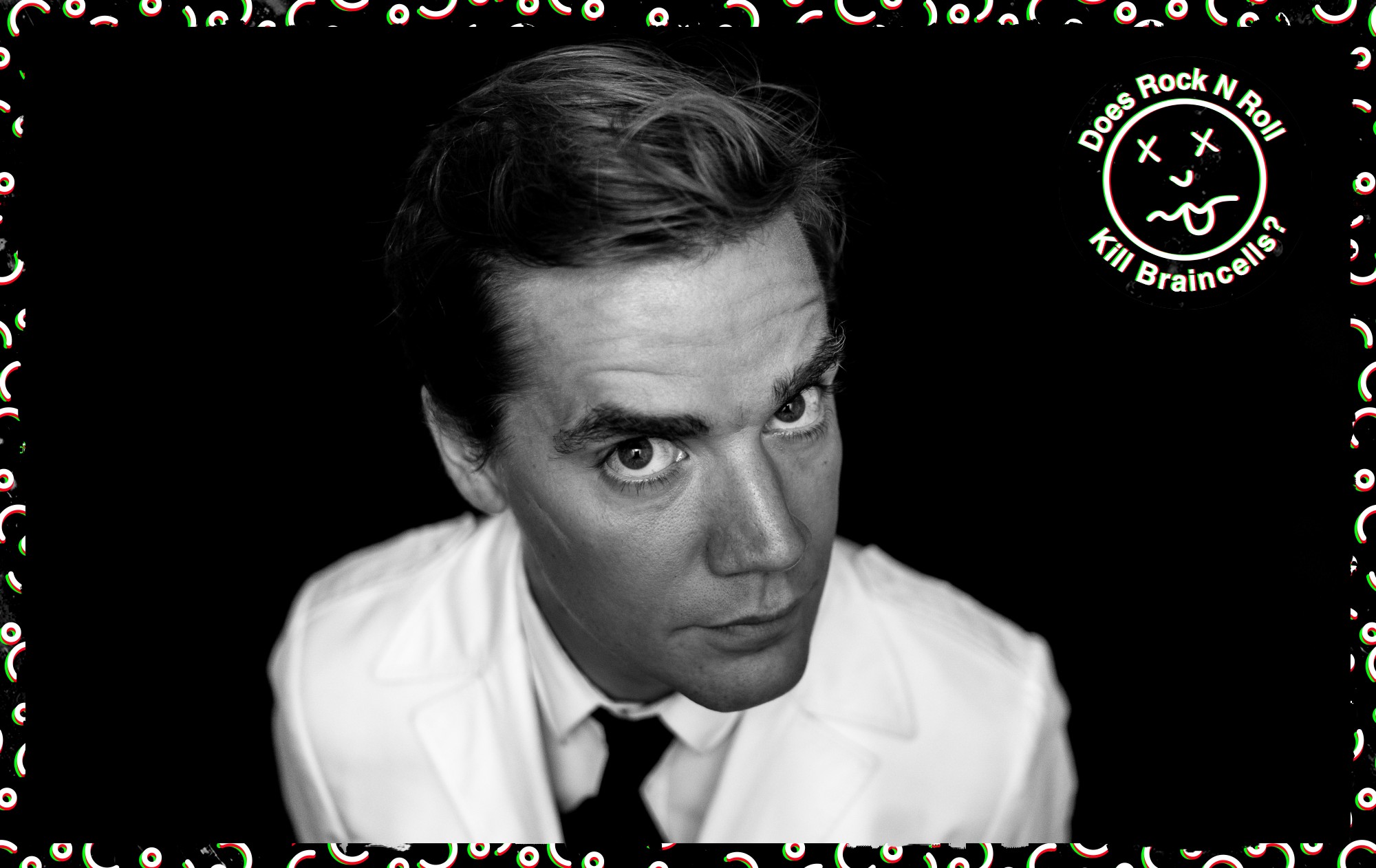 Which frontman once dressed as you for Halloween?

“Foo Fighters played a Halloween gig and they all dressed as us and started the set with ‘Hate to Say I Told You So’. I’ve seen the footage and talked to him about it – it was amazing he did that. We’re friends now. I’ve sang an AC/DC song with him live, I sold him a guitar, I went to his 50th birthday party, and I threw up in his house one New Year’s Eve while wearing a hat made out of an actual wolf’s head. It was very undignified – but a great party!”

You were signed to Alan McGee’s Poptones label. Who plays him in his recent biopic Creation Stories?

“I know from speaking to Alan it’s a guy from Trainspotting but I don’t remember his name.”

WRONG. It’s Ewen Bremner.  Poptones released the ‘best of’ compilation ‘Your New Favourite Band‘  as your UK debut album in 2001. What did the garage-band boom feel like?

“Being punk rockers, we were paranoid because we wrongly thought UK popularity would be intense but short-lived, so we were determined to make the most of it. Becoming an overnight success after seven years in a band is such a fun experience. The first couple of big shows in London felt like every famous English person we knew existed was there – your Noel Gallaghers, David Beckhams and Jarvis Cockers. It felt like stardom in movies, like everybody famous is into the same thing now.”

Who’s been the most unexpected person who’s turned out to be a Hives fan?

“On one hand, I think we’re really good so it shouldn’t be unexpected! But Tom Hanks. I didn’t know he was into fast rock‘n’roll, so that surprised me, but the respect is mutual.”

Name all your original nicknames from The Hives’ 1994 demo ‘Sounds Like Sushi’.

“Erm… It’s Curly Sue [now Dr Matt Destruction], Pig Champion Jr. [Vigilante Carlstroem]… I was Pete Fire, then Chris Dangerous remained Chris Dangerous, and … oh, man! Who was Nicholaus Arson? He’s in the room – I could just ask him! (Laughs) I don’t think I’m going to crack this one!”

WRONG. Nicholaus was known as ‘Velvet’.

“That’s right! It was from  Mel Tormé whose nickname was The Velvet Fog. On that first demo tape, we came up with those names while doing the artwork, and we also had side-projects like Pete Fire and The Flames.”

The tracks include ‘Nymphomaniac Dentists’, ‘Constipation’ and ‘We’ve Got Hives’…

“We were aged 14-ish and taking our first fidgeting steps into the world of music. There was a rumour that we were the fastest band in our tri-state area.”

Complete the following lyrics: ‘I bought no tree this year / And I slept with your brother…’?

“I wrecked your daddy’s car / And went down on your mother.”

CORRECT. From ‘A Christmas Duel’, The Hives’ 2008 festive duet ‘with Cyndi Lauper.

“It took some corralling to get Cyndi Lauper to sing – especially that line! Nicholaus played her a bunch of old soul stars’ records. After they’d finished a recording, they’d sometimes record joke songs which are some of the raciest stuff – all about cocaine and hookers, etc. She loves all those old singers, so we played her it and said it’s fine if you sing this. She was worried about the reaction. She took a long time to warm up – she was blowing up balloons and doing vocal warm-ups I’d never seen before – but then she amazingly nailed it in one take.”

“Our manager knew Cyndi Lauper and we said she should ask her to duet with us, which  sparked the idea for the song. We listened to her first album [1983’s ‘She’s So Unusual’] so much in the van when we were touring.”

In a 2003 Q magazine interview, which veteran rocker invited you to “suck [his] dick”?

“Nicholaus said that it always happens in a gorilla pack when the new alpha gorilla comes in and the old silverback has to go away and die. He gets mad about it and says things like this. That was the correct analysis of the situation! (Laughs) The interviewer was saying that Bon Jovi is mega-successful, sold a gazillion records, but has never been a cool band, and he responded by saying something like: ‘What’s a cool band? Is it The Hives with the fucking guy who stole his personality from James Brown and Mick Jagger? He should get his own personality’. I don’t think he was mad at me – he was just mad he was the old silverback who now has to go away and die (Laughs). I’ve never met him.”

Ever had any other memorable comments?

“Liam Gallagher said we reminded him of The Monkees, but that was part of the game and we met him since and he was awesome.”

His exact quote was: “They remind me of The Monkees. They wear the same fucking suits all the time. Like school uniforms. They might as well enlist in the fucking army.”

“(Laughs) What’s wrong with that, Liam? He wears a parka! That’s army wear! We all liked each other but it worked better in magazines to talk shit about each other. He’s pretty good at it too! Probably second after me! (Laughs)”

On The Hives’ first NME cover in February 2002, three things are mentioned in the headline: Sex! Booze! and… what?

“Is it something Swedish? Fistfights? Oh! Kylie!”

“She was in a lingerie commercial with one of our songs [‘Main Offender’] at the time. We met her while filming Top of the Pops and at the MTV Awards, and she seemed lovely. I had a birthday when we played the Roxy in LA and the likes of Courtney Love and Morrissey turned up, and afterwards they’d baked me a cake with that NME cover on it so it was a big deal in the music industry.”

At the 2002 MTV Video Music Awards, The Hives and The Vines played together in a “garage rock battle of the bands”. Which third ‘The’ group was invited but refused to play?

“We were asked to play the MTV Awards, then the ‘Battle of the Bands’ concept came after. We figured we’d win so we accepted! (Laughs). I can see that Julian Casablancas and co probably felt it was too corny to compete in music or whatever. Maybe I’m more of a showbiz person! It was a lot of fun, though, so no regrets. Maybe The Strokes should have said yes! Coming from the underground, all of us bands weren’t used to being in a mainstream environment, but it always seemed more fun to say yes than no – more fun shit happens that way.”

In 2008, The Hives played a gig at a zoo. Who did you claim the setlist had been selected by?

“(Laughs) Yeah, I remember having some conversations with the gorillas – not the band, the animals. It was a strange gig. Gorillas have that stressy, sweat smell of ice-hocky dressing rooms. It could just be because they’re in captivity. I’ve yet to find out what a wild gorilla smells of. Add it to the bucket list!”

Where’s been the most unusual place you’ve played?

“Early on, we played a submarine in France that was converted into a punk club. We climbed down a gun turret to reach the stage. It had weird acoustics and only could only fit around 40 people.”

Going out in the early days claiming you were the best band in the world onstage, did you ever face resistance?

You won Best Dressed Band at the 2003 NME Awards. Name any act you beat.

“I mean, it was obviously our award and I’m frankly offended you could even vote for other people!”

“When we were wearing simple shirts and ties, we’d look out into the audience and the front rows would be dressed as us, but we unwittingly destroyed the Hives cosplay movement by becoming too elaborate! The awards was a lot of fun, but it also felt like a competitive atmosphere. But when we all got drunk, camaraderie ensued.”

When can we expect your new album?

“We have a lot of songs but we’re still figuring out how to record and which producers to use. We probably have two good albums in there, and depending on which songs we use, it could go in a lot of different directions. Some songs sound like the 1950s and some sound like the future.”

Can you identify the following of your music videos from these three YouTube comments under them? You need get only two right the full point.

“This sounds difficult! (Laughs) I never read our YouTube comments!”

‘His eyes look like they could rival Nick Cage on a cartoon scale’.

‘When Colonel Sanders asks you to form a band, form The Hives!’

‘Who would believe me if I said I found this band because of the old female wrestler theme song?’

“Could it be ‘Walk Idiot Walk’?

“That made sense! ‘Cause of the Colonel Sanders reference – that was the first time we wore that outfit and wrestlers have used it as walk-on music.”

‘This song was legit in every video game’

‘I came here after the NASCAR’s 2020 Daytona 500 introduction of the drivers!’

“That ended up everywhere! And it still does. It’s used when the NFL edit together tackles in the football, and we love that we’re in the company of sports themes like Ramones‘ ‘Blitzkrieg Bop’ and The White Stripes’ ‘Seven Nation Army’.

‘That moment when Luke Skywalker and Pablo Escobar form a band’.

WRONG. It’s ‘Hate To Say I Told You So’ – which was used in the finale of Amazon’s Invincible and the lyric that hasn’t well is “Gonna spread the disease because I wanna”

“So recently people have connected it to COVID – well, I can sometimes see into the future! And thanks to the UK’s impressive vaccination efforts, I’m looking forward to coming over to the UK with The Offspring!”

“I’m not happy with that! I’ve been pretty sober throughout my rock career, so I assumed I would score higher!”

-The Hives tour the UK with The Offspring throughout November

Previous:Kenny Chesney Drops Four New Songs on ‘Here And Now (Deluxe)’: Stream It Now
Next: Worcester nurses on strike back at the bargaining table