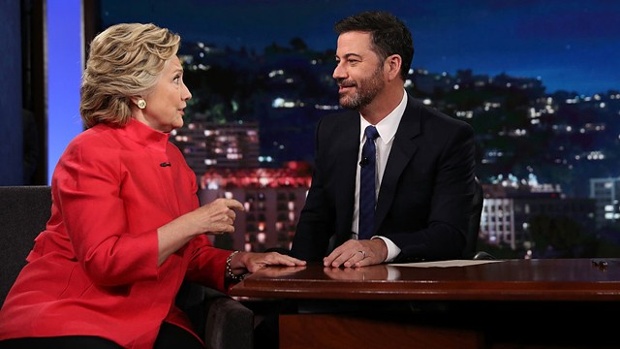 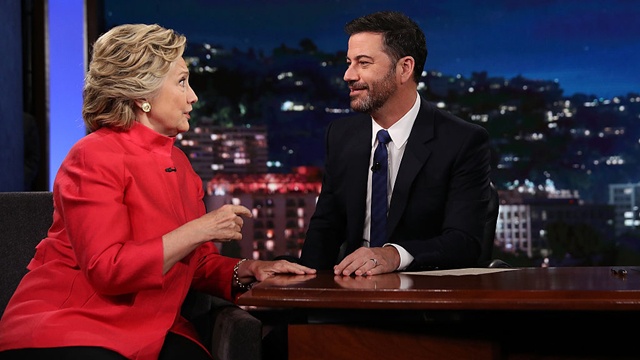 Despite some Republicans raising questions about her health, Hillary Clinton cracked jokes on Monday about the conspiracy theories.

Clinton dismissed the claims that she’s ill as “part of the wacky strategy” against her during an interview with Jimmy Kimmel in Los Angeles.

“Back in October, the National Enquirer said I would be dead in six months. So with every breath I take I feel like I have a new lease on life,” Clinton joked. “I don’t know why they are saying this. I think on the one hand, it is part of the wacky strategy, just say all these crazy things and maybe you can get some people to believe you.”

Clinton continued, “On the other hand, it just absolutely makes no sense. I don’t go around questioning Donald Trump’s health. As far as I can tell, he is a healthy as a horse.”

Making light of the questions, Clinton asked Kimmel to take her pulse to show she’s in good health — “Oh my god, there is nothing there,” the host joked — and Kimmel asked Clinton to open a can of pickles to prove her strength, which the former secretary of state did.

Clinton went on to dismiss the false claims by saying that Republicans are taking the campaign “into an alternative universe.”

“I am out here talking about [issues] and then I have to step into the alternative reality and answer questions about am I alive, how much longer I will be alive and the like,” Clinton said to laughs.

Monday’s appearance is Clinton’s third appearance with Kimmel, making the Los Angeles-based show the most visited late night show. The former secretary of state visited the show for the first time as a candidate in November and once again in March.

Clinton also commented on an issue that her campaign is currently grappling with: How to prepare for debates against Trump.

Clinton, who said she was taking the preparation seriously, added that she knows she needs to be “prepared for, like, wacky stuff.”

“I’m planning,” Clinton said, “on drawing off my experiences from elementary school.”

Previous:Watch: A local teen got to rock out with Billy Joel last week
Next: The 15 funniest Fringe Festival jokes