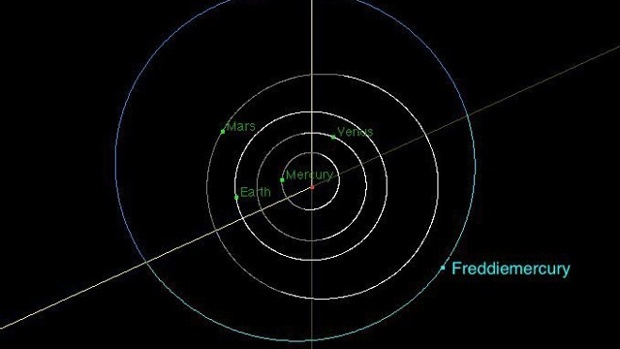 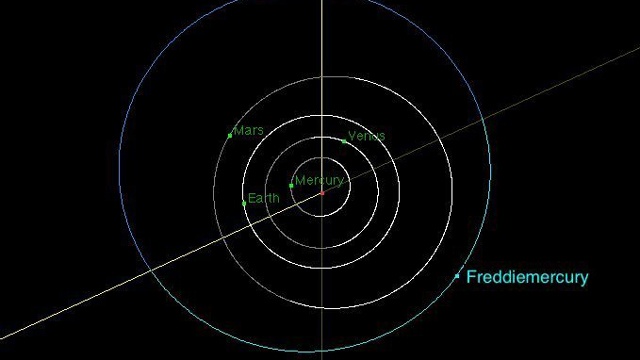 Freddie Mercury, who would have turned 70 on Monday, has had an asteroid named after him to celebrate the occasion.

The Queen frontman, who sang the famous words, “I’m a shooting star leaping through the sky,” from the song “Don’t Stop Me Now,” was honored by the International Astronomical Union’s Minor Planet Center. The center renamed Asteroid 17473 after him, which was discovered in 1991 — the year of his death.

It was announced by Queen guitarist Brian May in Switzerland during an event to remember the iconic singer.

“This is to recognize Freddie’s outstanding influence in the world,” he said.

The asteroid can be found in the main Asteroid Belt, between the orbits of Mars and Jupiter.

“It’s a dark object — rather like a cinder in space. Viewed from the Earth it is more than 10,000 times fainter than you can see by eye, so you need a fair sized telescope to see it,” May said.

The IAU said Mercury was given the honor because “his distinctive sound and large vocal range were hallmarks of his performance style, and he is regarded as one of the greatest rock singers of all time.”

Joel Parker, of the Southwest Research Institute, who issued the Certified of Designation, said the asteroid was originally named “1991 FM3,” so when a proposal to name an asteroid after the singer was received, the IAU selected it “partly due to the ‘FLM’ in the designation.”

“Even if you can’t see Freddiemercury leaping through the sky, you can be sure he’s there – ‘floating around in ecstasy’, as he might sing, for millennia to come,” Parker said.