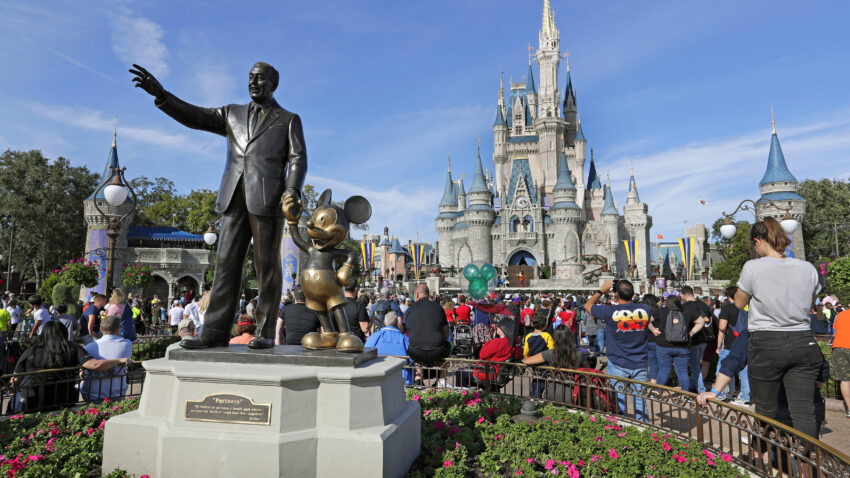 The “wench auction” was among the first to go in the exodus of classic-but-problematic Disney scenes. In 2018, the popular Pirates of the Caribbean ride got an overhaul when a redhead who had once been sold as a bride became a pirate instead.

Two years later, the theme park giant announced it was overhauling the Splash Mountain flume ride to lose its story line inspired by Song of the South – an outdated Disney film that the company no longer makes available to view because of its rosy view of post-Civil War plantation life. More recently, the company announced updates to the classic Jungle Cruise ride to remove “negative depictions of ‘natives’” and add new elements, just in time for a new movie out this summer.

“We want to make sure everybody has the best time – that guests from all over the world can connect with the stories we share and that how we bring those to life are respectful of the diverse world we live in,” Chris Beatty, Walt Disney Imagineering creative portfolio executive, told D23, the official Disney fan club.

Those are not likely to be the last changes at the parks as Disney examines its history with a more critical eye – and looks to the future with a bigger emphasis on inclusion. That initiative has even grown to include the way employees, known as cast members, present themselves on the job: They now have more flexibility around costume choices, nail styles, jewelry, visible tattoos and gender-inclusive hairstyles, Josh D’Amaro, chairman of Disney parks, experiences and products, said in a blog post.

“We want our guests to see their own backgrounds and traditions reflected in the stories, experiences and products they encounter in their interactions with Disney,” he wrote. “And we want our cast members – and future cast members – to feel a sense of belonging at work.”

But these changes aren’t taking place without pushback. Fans created a petition to “save” Splash Mountain from the new theme. Disney-focused sites are full of users who decry what they see as a progressive agenda in the parks, and announcements about updates are typically greeted with threats of a boycott. People who vocally advocate for revisions are often subjected to abusive messages.

This past month, a guest column in the Orlando Sentinel went viral when the writer, North Las Vegas resident Jonathan VanBoskerck, complained that “wokeness” was ruining his Disney experience.

“The next time I ride Jungle Cruise I will not be thinking about the gloriously entertaining puns of the skippers, I will be thinking about Disney’s political agenda,” he wrote in one of the most-cited lines. “That’s a mood killer.”

I love Disney World, but wokeness is ruining the experience | Commentary https://t.co/vobMA2IX6y pic.twitter.com/wpNmXXzgBK

The most recent tempest came in response to a write-up about an updated ride – not a “woke” change on Disney’s part. An SFGate review of Snow White’s Enchanted Wish, which debuted when Disneyland reopened last week, was largely positive but noted that the ride’s new ending includes a moment where the prince kisses Snow White while she is asleep – a scene that surprised the writers in an era where conversations about consent have become more urgent.

“It’s hard to understand why the Disneyland of 2021 would choose to add a scene with such old-fashioned ideas of what a man is allowed to do to a woman, especially given the company’s current emphasis on removing problematic scenes from rides like Jungle Cruise and Splash Mountain,” Julie Tremaine and Katie Dowd wrote.

While the piece ends with praise for the ride, and even for the final scene “as long as you’re watching it as a fairy tale, not a life lesson,” the piece became a rallying cry for Fox News and other conservative media, which declared that “cancel culture” was targeting Snow White.

Tremaine, a contributing editor for the site who covers Disneyland, said the backlash grew far beyond the level of criticism in the story. Some of the responses included mentions of sexual violence and suggestions of suicide.

“Our message got rewritten so many times,” she said. “Every time it got rewritten, it got bigger and more offensive and more distorted from what we actually wrote.”

She has written about other updates underway and potential future ones, and understands that fans who grew up with Disney parks or movies have such a “deep ingrained emotional attachment” to their memories that they don’t want to see anything change. But, Tremaine said, she expects to see the company continue to examine old tropes that are no longer acceptable.

“I think there are ways to do it where it can preserve the character and what people love about the old rides, and preserve that nostalgia, and still update it in a way that feels more inclusive,” she said.

The updates in the parks follow a shift in the company’s films over the past several decades. Anne Zimmermann, a lecturer in the Rollins College English department in Winter Park, Fla., said Disney’s princesses started becoming more inclusive, assertive and even feminist over the past couple of decades.

“Today’s generation, they are kind of expecting this of Disney, and they will tell you it’s long overdue,” said Zimmermann, who uses Disney stories in her classes.

At the same time, Disney has recognized that some of its older films include outdated and racist cultural stereotypes and has added warnings on its streaming platform or removed those movies from children’s profiles.

“They’re moving not just toward not being racist, but anti-racist,” Zimmermann said. “Changing the parks continues their own narrative of change.”

Her students visit Disney parks for field research – or, more recently, explore rides online – and flag those that strike them as problematic.

For now, there’s a laundry list of other nominees for eventual updates: the Peter Pan ride for stereotypical depictions of Indigenous people; a ride in Epcot’s Mexico area that includes broad stereotypes; Dumbo, which is based on a movie that includes racist tropes. Fan sites circulate longer lists of what rides might be under the microscope next, occasionally with outraged remarks: It’s a Small World, Hall of Presidents, Country Bear Jamboree.

Disney isn’t saying what is next, but the company has dedicated a team to making sure that updates are done right.

“You create experiences that will make people feel welcome, seen and heard and to let them know that their stories are just as important,” Carmen Smith, creative development and inclusion strategies executive for Walt Disney Imagineering, said in a video. “And so my responsibility is to look at what do we have now and does it resonate with our guest in making them more reflective of the world we live in.”

Beatty, the creative portfolio executive, said any time the company changes a classic, they bring in Smith and her team to make sure “that any time we show something culturally significant, that it’s done in the proper light. It’s done in a way that celebrates diverse backgrounds and interests – that’s part of the rich storytelling, not something you poke fun at.”

The bigger inclusion push is not only a reflection of the times and country’s consciousness, but also a business strategy as Disney needs a broader, more diverse audience to grow.

Previous:Floyd Mayweather Wants to FIGHT Both Logan and Jake Paul! Watch the Pre-Fight Press Conference
Next: Elon Musk is being brought in to save SNL’s sagging ratings. He could sink the show in other ways.