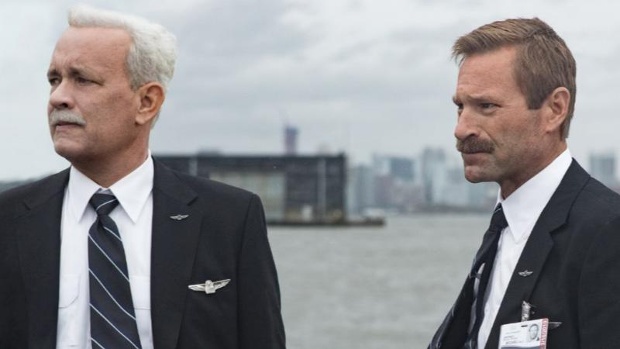 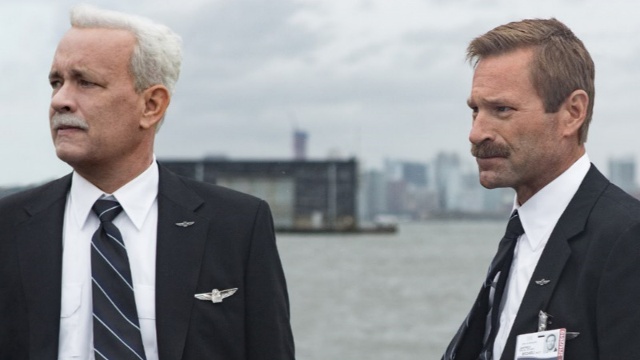 Even though he’s trained to fly himself, acclaimed actor Aaron Eckhart said he developed an even greater respect for pilots after co-navigating the true-life drama “Sully.”

The film, which opens in theaters and on IMAX theaters nationwide on Friday, chronicles Captain Chesley “Sully” Sullenberger’s and First Officer Jeff Skiles’ “Miracle on the Hudson” water landing, as well as the jarring aftermath as the pilots’ decision-making during the crisis comes into question.

The thing Eckhart was most impressed with after meeting and consulting with Sullenberger and Skiles — whom he plays in the film — is that despite the miraculous landing, the men look on the 2009 events that ended in the Hudson River in New York City as a responsibility of the job and not an act of heroism.

“Sully and Jeff said, ‘Hey, that’s what we do for our job. We were trained and have 20,000 hours in the air. This is why we have checklists and procedures,” Eckhart said in a recent phone conversation from Los Angeles. “They just think of it as part of their job and don’t look at themselves as heroes. Sully knew because of his work that a plane at this weight is going to glide this far at this air speed and he was looking out for that.”

Having spent time in the cockpit over the years, Eckhart said the pilots’ mindset resonated with him while making the film.

“I pilot a little bit myself, and I know that I need to be looking for alternate routes, highways or waterways in case I have a problem in the air. It’s second nature to these guys,” Eckhart, 48, said. “All the pilots I’ve talked to after making this movie, they all think it’s part of the procedure of being a pilot. It’s their job and they all could have done it.”

Directed by legendary filmmaker Clint Eastwood, “Sully” naturally presents the intense moments in the cockpit and cabin of United Airlines Flight 1549 on Jan. 15, 2009, and the blistering scrutiny Sullenberger (Tom Hanks) and Skiles (Eckhart) faced in front of the National Transportation Safety Board during the investigation into what went wrong with the plane.

From the vantage point of Sullenberger and Skiles, a bird strike took out both engines of the A320 aircraft they were piloting upon takeoff and their only option was a forced water landing on the Hudson River.

But to the NTSB, computer analyses and flight simulations suggested that they could flown the plane back to the point of departure at La Guardia Airport in New York City, or at the very least, could have landed at Teterboro Airport in New Jersey. Further complicating matters, the NTSB claimed during the investigation that at least part of the left engine on the plane was functional, which ultimately would provided the plane with enough thrust to land at either airport.

In addition to the title character, “Sully” shines a light on Skiles and several of the first responders that saved all 155 passengers and crew during the fateful, frigid day on the Hudson in 2009. The interesting thing is, most people associate the “Miracle on the Hudson” with Sullenberger, while the efforts of Skiles — who commandeered the takeoff of Flight 1549 — have largely been left in the background. As little known as Skiles is in comparison to Sullenberger, he is, after all, the person who knows the most about what happened on the flight, as the other pilot in the cockpit.

“Jeff and I talked about this, and he said he realized that there has to be a face to the story — that the media is going to pick out a hero and Sully was that guy,” Eckhart said. “Sully was the captain of the flight and Jeff came to terms with that and receded into the background. They were thrust into the spotlight so aggressively that one had to take that lead role. I don’t know what Jeff’s real feelings are about it, but he and Sully are still good friends today.”

No matter who took the lead, there’s no question, as audiences will discover, that Sullenberger and Skiles were both in the hot seat during the NTSB investigation and eventual hearing by the agency, which illustrated the viability of the alternate scenarios to landing in the Hudson.

And while the treatment of the pilots will appear harsh to audience members — in stark contrast to the media adulation they received in the days and months after the landing — Eckhart said it’s the NTSB’s job to scrutinize, and the pilots, as well as he and Hanks, accept and respect the process as an absolute necessity.

“There was a lot on the line with what they did. You’re talking about a water landing, which in itself is an improbability, and then you’re talking about saving everybody’s lives,” Eckhart observed. “In the hearing, you find out that they could lose their commercial licenses, lose their pensions and lose their reputations. Everybody that has seen the film so far has been maddened by this NTSB hearing, but that’s what it’s there for. It’s the spine of the movie. It’s the drama. People think they know what they’re going to go see, but I think they are going to be pleasantly surprised that they’re going to see so much more.”

In the end, Eckhart added, “One hundred percent, Sully did not see the NTSB as adversarial. He said they’re doing their job. They’re a necessary part of keeping us safe.”